This is part of an ongoing campaign. You can find the other sessions over on the sidebar. This session was run on December 8, 2022. This session contains secret communications between me and the individual players. This means that these recaps do not cover everything that happened in the session. I will be reporting only the information that all players had access to. This portion of the campaign uses Zozer Games excellent Outpost Mars setting for Cepheus Engine. 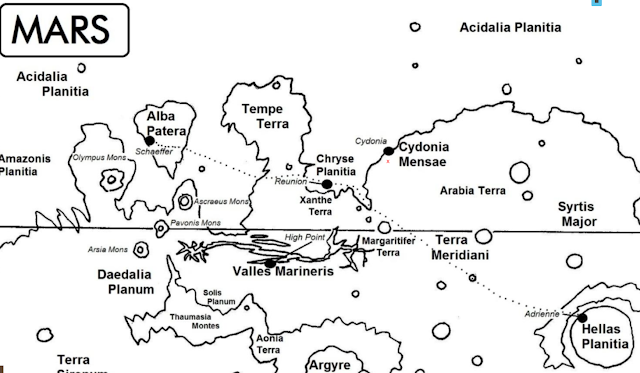 When the group returned to Reunion following their diversion to the wrecked airship, Wilson was formally placed under arrest for the attempted murder of Randolph Hertz. Due to this, a new member joined the team, Alder Chestnut. They had a few weeks to train and make improvements to 10wPink before their next assignment. The focused on trying to minimize the chance that the strange red sand could infiltrate their suits or the rover in the future.

Jin summoned them for a briefing that started with an update on the results of their last mission:

They have subjected the red sand to a battery of tests and exposed several different systems to it. While the specifics are close hold because of the potential for weaponization if it is artificial nanotechnology, the results are broadly consistent with the behavior the team observed during their mission.

Two theories are evolving about the red sand and its origins. One group of Special Projects scientists thinks that the sand is evidence that one of the powers operating on Mars has nanotechnology that is far more advanced than expected. These scientists posit that they may have experienced some form of lab leak or perhaps a vessel carrying the nanotechnology crashed. If true, this could have dire implications given the sand’s ability to disrupt computer systems. It is likely that nanotechnology of this type, if it exists, is a violation of several treaties governing the development of nanotechnology for offensive purposes. It is unclear if these treaties have any force on Mars though. There is a subset of this group that thinks that the nanotechnology might be Martian in origin. But to have survived this long, it would have to be self-replicating and there should be far more of it around if that was the case.

The second group of scientists theorize that the red sand is a rudimentary form of silicon-based life. If accurate, it would be the silicon-based life equivalent of early single cell organisms. There is a split amongst this group on the origin of this organism. Some think that it may be remnants of life native to Mars, perhaps awakened by the recent terraforming efforts. Others think that it was brought here by the Martians, either from their home planet or another planet they had explored. There are questions about why it has not spread all over the planet. Some believe that it has been inactive until recently, others that conditions on Mars either do not allow it to self-replicate or inhibit its ability to do so.

The black globe they recovered during the rescue mission is of great interest to UNSCO and is the first functioning alien tech artifact known to have been found. The possible benefits to humanity to be gained from its analysis are almost impossible to overstate.

The scientists who have been examining it believe that, by activating it, Darryl Hall (the passenger whose seat was at the center of the globe) put it in a state that they do not currently have enough knowledge to reverse. They need to either get more examples of the technology or observations made of the device before it was triggered. As it currently stands, the black globe seems to absorb all energy directed at it, making it almost impossible to analyze in a meaningful way.

Darryl Hall was working in Adrienne on the terraforming project for several years before he got on the transporter flight to Reunion. Jin tasked to go to Adrienne to investigate. Their mission was to learn where Darryl Hall got the artifact, find other samples if they exist, and find records of any observations made of the device before it was triggered.

The UNSCO files on Darryl Hall are slim:

·      After high school he was selected to go to the US Air Force Academy where he majored in electrical engineering.

·      He spent most of his twenty-year Air Force career in various labs. He retired five years ago as a lieutenant colonel program manager at the Air Force Research Lab.

·      After retirement, he took a position with New Dawn, a venture capital firm specializing in high tech investment. He worked to evaluate different technologies as investment prospects. This position was located on Mars.

·      Most of his time on Mars has been spent in and around Adrienne evaluating different terraforming technologies for investment.

·      He lives in an apartment there with his 22-year-old daughter, Samantha.

They decided to check out the New Dawn office in Reunion before heading to Adrienne. The New Dawn office on Reunion is small, more of a prestige office and meeting space than a functional workplace. There are two support staff working there, Noelle James and Vera Hastings. There is only one investment analyst there, Anthony Kacillius. Noelle and Vera mostly coordinate the other New Dawn efforts on Mars and arrange for lodging and transportation on those coming to Reunion from off world or elsewhere on Mars. Anthony’s primary job is influence peddling with the various entities headquartered in the city.

They scheduled an appointment with Anthony under the pretext of being UNSCO investigators working on the transport crash. He told them that Darryl Hall had been returning to Reunion in order to discuss the bankruptcy of Kennsington Associates, a startup drill design company that New Dawn had invested in. The company had been testing a drill prototype on Lake Barsoom when funds ran out before they could secure enough funding to continue work. Anthony explained that it was his understanding that most of the Kennsington employees and management used the last of their funds to leave Mars before filing their bankruptcy declaration. He explained that it is common practice for small companies to hold back enough funds to get everyone back to Earth, as no one wants to be stuck on Mars. They were unable to get more information out of him.

Romilius decided to hack the New Dawn computer system and discovered an email from Darryl Hall to Anthony telling him that Kennsington found a strange artifact while drilling on Lake Barsoom. He had accepted the artifact in exchange for allowing them to get off planet before the extent of their financial troubles became public knowledge and other creditors came knocking. He explained to Anthony that the artifact was almost certainly worth more than any other value they could extract from Kennsington at this point. Darryl stated that he would be bringing the artifact to Reunion on the next available flight. He included a picture of the artifact, a silvery box about one foot to a side with no apparent way of opening it or external features. Darryl also told Anthony that one Kennsington employee, a technician named David Saunders, had been arrested on drug-related charges before he could leave the planet.

Romilius forwarded the email to the rest of the team and they prepared to head to Adrienne.

By rmckee78 July 04, 2022
Work-in-progress map of the Byrny area I admit to not being especially happy with the existing subhex maps found in the classic Judges Guild products like The Mines of Custalcon . I think the six mile hexes are better divided into one mile subhexes instead. Also, the Judges Guild version does not have enough farms and mines for the people that live in the area. I do not need anything approaching realistic medieval demographics in my games, but having a bunch of manors outside of Byrny is a great plot/conflict generator. The manors around Byrny are held by a set of families made up of those who owe allegiance directly to the Overlord, those who are vassals to Thunderhold, and those who have sworn themselves to Governor Hetalan of Byrny (who has a complicated split allegiance to the Overlord and Thunderholm).  Anders (Byrny) Located northeast of Byrny, Lord Anders holdings include ample farmlands and some good forest. His claim is older than any of his neighbors, and portions of their
2 comments
Read more

By rmckee78 July 11, 2022
This is Part II of my look at the various lords in the Byrny Area. Part I can be found here .   Daven (Sten) Located north of Byrny. Lord Daven inherited this manor from his grandmother, Helga, who was awarded it by the Sten family for her service against bandits.   Lord Daven’s father died as a young man and Daven inherited his grandmother’s magic sword, Argetlahm, along with the land. It is rumored that the sword is intelligent and may be running the manor through its owner. While well-liked by his peers, most will admit that Daven comes across as a bit dim in conversation, so there may be some truth to that rumor. What he lacks in intelligence, Lord Daven makes up for in enthusiasm. He will be personally participating in the tourney. Fiel (Byrny) Located northwest of Byrny. Lady Fiel reluctantly returned to the Byrny area from the City State on the death of her father to assume the duties of running the manor. She inherited two years ago, following a rough
Post a Comment
Read more