This is part of an ongoing campaign. You can find the other sessions over on the sidebar. 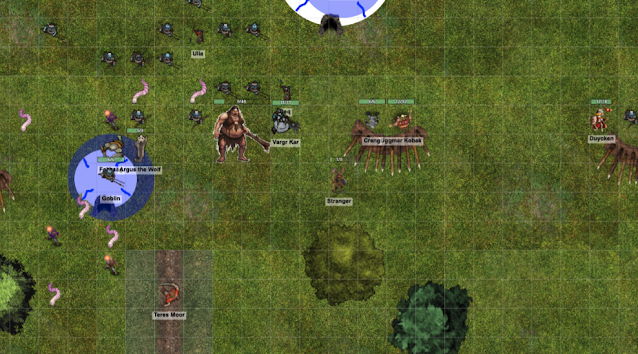 The session started right where we left off at the end of session 12. The party had joined with some Wasp Swarmer goblins to mount an attack on the White Worm tribe that attacked the village of Filmoth. The Wasp Swarmers started the assault by flying down the cliff face to the east, and the party joined in by attacking from the south. They had hoped to split the White Worm forces, and while that worked initially, they had underestimated the enemy's strength. The Wasp Swarmers took heavy losses to the east and the White Worm tribe had turned the party's west flank and were threatening to cut off their retreat. It was also clear that the shamans by the large central structure were up to no good. At the end of the last session, the party's front line was taking heavy bow fire and Stranger had to retreat from the melee after being badly wounded. The goblins managed to reach the archers in the party's rear and Gwythian escaped with Daniel, their fallen hireling.

Uggmar, recognizing the extent of Stranger's injuries, dropped the two goodberries he was holding and dashed to the east to help Duycken hold that flank. With Gwythian and Daniel gone from the field, the White Worm shamans were able to cut the party off from their southern escape route and take down Stranger with their slings. Cozsari, who was sporting over a dozen arrow wounds herself, told Vargr to wait until she had a chance to draw the frontline goblins' attacks before he withdrew to get Stranger. The Odin priest, understanding the sacrifice the giantess was proposing, gritted his teeth and prepared to rescue his friend. 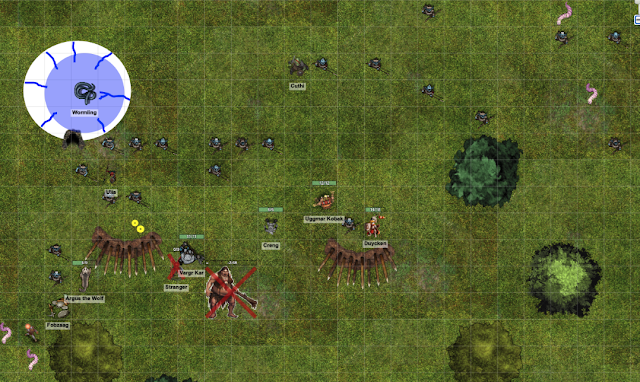 To the east the worms took down more of the Wasp Swarmers with their acid spit attacks, and two of them managed to hit Cozsari as well. Seeing her opening, the bloodied giantess squashed the goblin in front of Vargr and then took a step backwards. The goblins took the bait and the whole front line attacked her as she tried to move away, landing several vicious cuts. Vargr took advantage of this distraction and grabbed Stranger to carry him to safety. The giantess staggered eastward but dropped under a cloud of goblin arrows. To the east, the last of the Wasp Swarmers fell as well. A column of red light emerged from the strange sigil the shamans were clustered around. 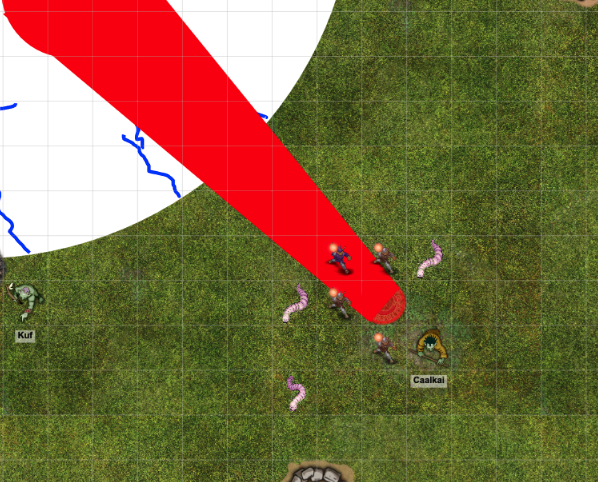 Realizing that the battle to the east was a lost cause, Uggmar, with Creng in tow, decided to retreat to the south before that route was closed off too. Duycken killed the goblin he was facing and started moving south himself. Vargr staggered south under the weight of Stranger as he was pelted with arrows. Without Cozsari to draw the White Worm's fire, he found himself the primary target for their archers.

Suddenly, the party heard a fast, thumping sound and five hoops leapt into the fray. They started attacking the goblins that were trying to cut Vargr off from the southern escape route. They set into the White Worms with two-handed scimitars, dropping several. With a great cracking sound, the central structure split open where the red light was shining on it and a giant worm unfurled itself from inside. 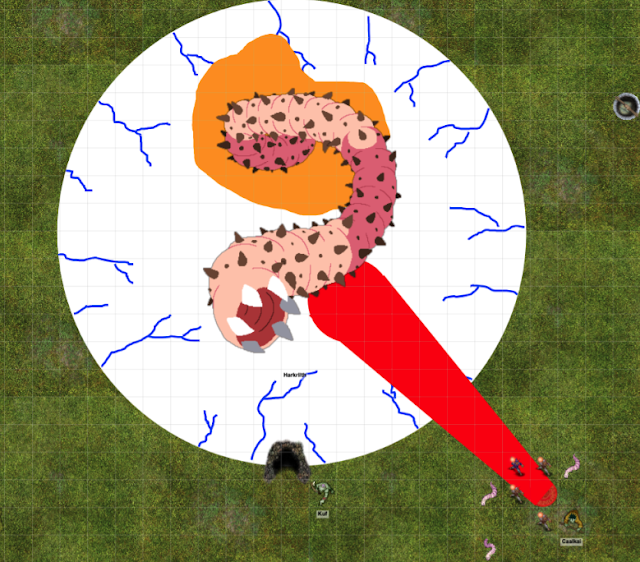 Uggmar managed to escape the field of battle as the hoops took down a few worms and one of the shamans. The double distraction of the worm and the hoops gave Vargr the opening he needed to escape with Stranger.

The worm reared back and breathed a cone of acid, melting the group of shamans that had awakened him from his slumber. 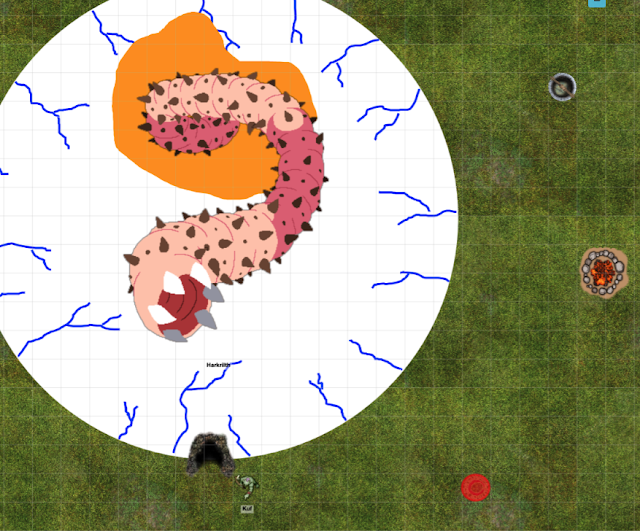 Duycken, intent on being the last to leave the field of battle, joined the hoops and killed another goblin. The nearest hoop hissed at him, "We are leaving, with or without you," and he withdrew from the field. As the party fled from the area, they could see the worm retreat back into the central structure and the White Worm goblins begin to carve up Cozsari's body.

Once they had retreated to a safe distance, they stopped to heal up. The hoops caught up with them. They were not as friendly as the party expected and refused to talk to anyone but Stranger. The leader, Havoc, introduced himself and his companions: Hector, Tumble, Padfoot, and Timber. He explained that they had been following the group for a few days**. He pressed Stranger as to why he was there. Stranger informed him that he was from the White Paw warren, but his clan had been wiped out due to a human mining. Havoc pointed out that Stranger seemed to spend a lot of time helping humans and travelling with half-orcs, goblins, and giants. Stranger assured him that this was only until he could find a way to find the humans responsible for his family's slaughter and a way to destroy them. Havoc seemed pacified, if not satisfied with these answers, and made Stranger promise not to use his druidic magic to increase human crop production. With this assurance secured, the hoops left abruptly.

When questioned by his friends, Stranger explained that hoops are very territorial and that it was not strange at all for Havoc and his friends to question another hoop's presence in their territory. He also explained that the hoops had not aided them out of altruism, but because they were concerned that Stranger might be an advance scout from another warren, and they could not allow their only source of intelligence to be killed.

The party decided to return to Cozsari's cave to loot the items they had decided to leave there. They then returned to Filmoth and informed Roderick that they had inflicted heavy losses on the White Worm tribe that had attacked the village, and that the giantess that had been shaking them down for goats was dead. He thanked them for their work against the goblins. They then returned to Byrny. Uggmar needs to spend two weeks training to achieve the next level, and Duycken plans to find a noble to sponsor him in the tournament before it starts on the 14th.

* It hasn't been covered in these recaps, but when the rest of the party returned to town following their adventure in Stormview Manor, Vargr stayed behind at the manor with Cozsari and Creng, who would not be welcome in town. While the Cozsari was initially wary of the Odin priest, since his god had a history of either impregnating or killing giants, Vargr had worked hard to win her friendship during their time together.

** We didn't get into specifics during the session, but the hoops picked up the party's trail back in Session 8 (5 Sweetrain 4433) when they encountered another party moving through the mountains. The hoops had been tailing that group and were surprised to see Stranger, a hoop they did not recognize, approach them. Stranger had come within 1 of detecting the following hoops on three different hearing checks over the last few sessions. Some of which he made, and some of which I made in secret.

By rmckee78 October 17, 2020
This is part of an ongoing campaign. You can find the other sessions over on the sidebar.   This session was played on October 4, 2020.   15 Urui F.A. 15   Having dealt with the wights, the fellowship decided to finish with the bandits before returning to town. Unsure of how well Dirdan's Charm spell would work if asked to attack his friends, they jumped Eowic and tied him up.  Tulip peaked down the hole in Mound B and could see a few bandits standing guard below. Two of the bandits seemed to be trying to force a cell door open. The party decided that the best plan was to make a two-pronged attack with some attacking from above while another group approached through the underground from the south. The underground group descended the stairs in Mound D as Dirdan used his magic to boil a barrel of water on Mound B. Tulip yelled to draw a guard's attention and Dirdan dumped the boiling water on him as the others peppered him with arrows. Meanwhile, the group below made their way
Post a Comment
Read more

Tekumel: Resources (I Tekumeled and So Can You IV) (Updated)

By rmckee78 May 05, 2020
Since I wrote this, new information has come to light about M.A.R. Barker, he was a Nazi . I no longer support playing Tekumel. I will keep these posts up, because I believe in preserving the past, even when it is ugly. There may be a time when sufficient time has passed that Tekumel has been examined and can be played in the right context (like Lovecraft), but that time is probably very far in the future. Due to the intricate interconnections between the setting, the religious themes in it, and the non-western derivations of its societies, I believe that a thorough examination by people far smarter than me will be required before I am comfortable that I understand which parts of it might be harmful. Like many, I was drawn to Tekumel because it seemed more open than other fantasy worlds, with greater representation of the diversity of humanity. Obviously, it is horrifying to learn this. I encourage others to seek out other fantasy worlds that have involved people of
Post a Comment
Read more